Hot on the heels of the groundbreaking success of the arcade version of Donkey Kong in 1981, several additional game titles were in the release pipeline at Nintendo and Sky Skipper (Sukai Sukippa) was one of those games.  It was originally planned for global release in all three of the ‘standard’ arcade cabinet formats: upright, cocktail and cabaret.  However, initial play testing and earning reports in the US did not fare very well and the stateside release of the game never happened as was originally planned.

Fast forward 30+ years to today and no known games have surfaced. In fact, the only items that are known to exist are a VERY small number (less than 4) of PCB’s – so the prospects of finding any complete and working games are virtually nill.

Despite the aforementioned play testing results in the US, the game was well on its way to being released before Nintendo pulled the plug on it in 1982. To support that notion, the games original flyer and some other supporting pictures have surfaced over the years.

Here’s Alex shown holding his copy of the flyer and some additional pictures from the back, as well as a couple of pictures from a Japanese trade catalog that surfaced a while ago: 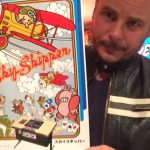 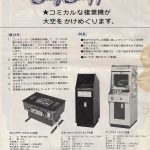 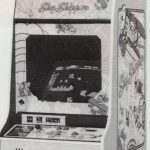 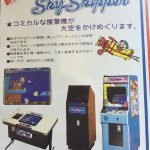 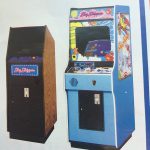 Some additional research has yielded a (very) few additional pictures of the game, with one of the best being from Jerry Momoda’s blog post ‘Nintendo: My First Video Game Job’.  It’s an excellent article detailing his role at Nintendo of America, and you can see a Sky Skipper cabinet in the back right of one of the pictures in the article: 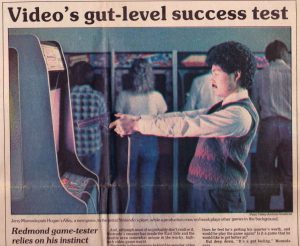 Despite the game never being released in the US (or anywhere, for that matter) – and being virtually unknown everywhere else – some versions of the game can still be played today.  The original arcade version is available via MAME, as the ROMS for the game were dumped at some point in the past and Parker Bros. released a version of the game for the Atari 2600 back in 1983: 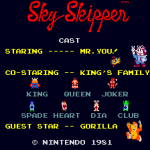 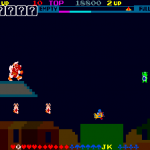 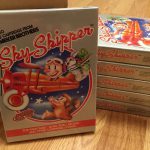 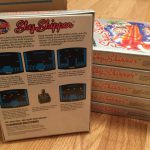 So why does all this matter and what are we going to do?

For 30+ years, the arcade collecting community has only seen bits and pieces (at best) of Nintendo’s arcade game ‘Sky Skipper’ and the game has been virtually non-existent to date.

We are working to change that.

If all goes to plan, we will unveil Sky Skipper – in its fully-restored glory – to the world and tell the story of what it took to bring this almost-lost game back to life. We feel that this part of arcade history deserves to be documented and recreated so that it properly claims its spot in Nintendo’s arcade legacy and we want to share it with the world for all to learn about.

This is a significant undertaking and could only happen with the help of our 3-man restoration team and some very dedicated people in the arcade community (and Nintendo) behind the scenes.

This project has truly spanned the globe in its efforts to be completed and once some additional details have been finalized, we will be proud to announce the 2017 world-premier of Sky Skipper – both in the US as well as the UK!

Once the unveiling locations have been announced, we urge you to come out and play Sky Skipper in it’s original (and intended) format – this game is truly something special.

Look around the site – take in the history, the pictures and hit us up via our contact form to ask any questions or just drop us a word of encouragement/advice/criticism – we’re all ears to hear any and all of what you’ve got to say!

We’re looking forward to sharing the story and the game with the world – stay tuned!