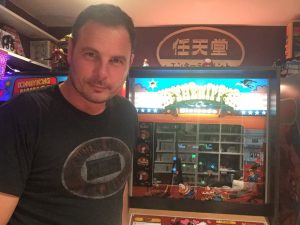 Before I can answer that question, we need to walk backwards in time a bit… let’s go back to 1979 –  which is the year it all changed for me.  While visiting my local leisure pool one day, I saw something brand new – it was this huge magical box with its cool side art and loud heart-destroying beat – it was Space Invaders, and I was instantly hooked – video games were about to change my life and I didn’t don’t even know it yet.  I would hang out at my local arcade and I made sure I played every game I could, and even if I didn’t have the money to play all the games on the floor, I’d hang out and watch everybody else playing, walk around and read the attract screens for tips and sometimes challenging players for the high score.  With new games coming in every few months, it was a exciting place to be.

Some of my early favorites were Donkey Kong, Juno First and Kung-Fu Master to name just a few, but one game I remember very fondly and it goes by the name of “Sheriff”.  I loved this game – it was an easy ‘pick up and play’ shooting-type game with the cowboy theme – which was all the rage when I was a kid.  It was unique for its time with its gas knob controls and free movement around the screen, but it was a easy game to play and seemed to be good value for money for the time.

It wasn’t a popular a game – in fact I remember most kids hated it for being too slow.  It was a great game for me, however, as it meant I had the game to myself and I guess that’s where I built up a fondness for this particular title, as I was always at the top of the leader board and I could always leave the arcade knowing I had the high score on at least one game.  But as it wasn’t that popular – it didn’t stay more than a year or so before they bought in a new game to replace it – Pac-Man.  In fact, I have never forgiven it for for kicking my favourite game out lol.

So moving forward – all through the 80’s I played and collected games for the Sinclair spectrum and BBC micro computers and I never saw a port of sheriff on either; by the time we had got to the 90s I I had forgotten all about this game I loved so much.

I also collected games for Super Nintendo and GameCube and it wasn’t until 2009 when I joined the arcade forums I realized I could actually own one of these arcade games i had spent so much time playing when I was a kid – but I couldn’t remember most of the ones I played and I certainly didn’t remember the name of ‘Sheriff’ – I could only recall the actual gameplay and the sprites and art and the noise and the sound, but could not remember the name of the game – which, in turn, made finding this game a nearly-impossible task.

In the mean time, I bought my first arcade machine which was ‘Space Invaders Part 2’ and my second which was ‘Donkey Kong Jr.’ and before you know it I had a ‘Space Firebird’ and a ‘Donkey Kong’ and was slowly building a bona-fide Nintendo arcade collection.  So the more I got into the hobby, the more friends and connections I made and it didn’t take long before I was on European and American forums hunting down my own ‘Sheriff’.

To my pleasant surprise it turned out that ‘Sheriff’ was actually made by Nintendo, but unfortunately was extremely rare and only one had been found and this was by collector in Belgium. When I first saw his machine it didn’t ring any bells – I did not recognise it as the one I used to play.  However, I later found out that Nintendo licensed Sheriff to a UK company called ‘Bell Fruit’ and I found some pictures of a Bell Fruit Sheriff cabinet on the Internet and realised this must’ve been the cabinet that I played on back in the late 70’s and early 80’s.  Based on this newfound (to me) information, I was determined to acquire Sheriff for my now-expanding Nintendo collection.  I reached out to the collector in Belgium managed to work a deal and I arranged a road trip from London to Luxenberg (900 mile round trip) which was very exciting and a lot of fun.

So with Sheriff now in hand, this is where I really seriously started thinking about acquiring the rarer Nintendo arcade machines – the ones that were made before Mario.

I found out that Nintendo of America was only set up in 1980, so many of the games that were made before Mario didn’t even make it to the USA.  However quite a few made it to Europe, which was great as it meant I had potential access to more of the rarer games then I once had thought – Space Fever, Space Launcher and Radarscope soon joined my collection and I was getting closer and closer to having a complete Nintendo line up.

But there was one game that always eluded me…. and that was Sky Skipper.

I had seen pictures on the Internet of a flyer so I realised it must have been released (or at least completed) at some point in the past, months of research proved that the flyer was about the only solid piece to go on in regards to Sky Skipper.  There was no other pictures of the game cabinet, game play or anything.  Other than the black-and-white flyer, the game didn’t seem to even exist. In fact, it took me over a year to acquire the flyer and that was a challenge in and of itself.   Delving deeper into the game history on the Internet I found a collector in Sweden who had what he thought was a sky skipper PCB that had been factory modified to play Popeye.  After doing some more research, I determined that the Swede’s PCB had the telltale ‘TNX01’ designation so that was the first clue that it was indeed an original Sky Skipper PCB.  So, it was logical to assume that at some point Nintendo had modified that boardset for Popeye – but why and could it be changed back?  That led me to the even bigger question of how Sky Skipper was ever dumped to MAME and how did that happen on a game that wasn’t released anywhere in the world?

I tried to track down the details on the who/what/where/why of the MAME dumping, and it has proven to be a very difficult subject to verify and understand in its entirety.

Ultimately – I wanted this game for my collection.  I wanted to buy the PCB from the collector in Sweden, but to re-engineer the game back to its original format so that it would play the Sky Skipper ROMS would be impossible task for me, so I let it be.

Six months pass and somewhat out of mind (and totally out of this world) – I found another Sky Skipper PCB on a raid in the north of England in an old and dusty  ex-operators warehouse.  Believe it or not – but the PCB set was complete – never used and sealed in a bag.  Imagine my dismay and shock when I realized what the PCB set actually was – it was labeled on the bag as ‘Popeye’ and had been factory- modified to play Popeye, but in looking over the PCB stack and how it was laid out (and the codes on the board) I knew what it truly was.  As far as I knew and was concerned,  I was concerned the only person actively searching for it.

So with this PCB now in my hands I approached my very good friend Mark Whiting.  Mark is an engineer by trade and extremely clever. He has worked on many prestigous projects for the British Government as well as several famous musicians so I figured he might be up for the de-conversion task. After talking with him about the work that needed to be done, he decided he needed a new challenge and took on the project of re-engineering both Popeye PCB stacks back to Sky Skipper.  It took many months to do the work and there were many hurdles along the way – security chips that had to be removed and reverse-engineered, circuits re-mapped by hand (we had no schematics) and many false starts before the game would even attempt to boot with the Sky Skipper ROMS – it all seemed to take forever.

Over the course of those months, the game literally came together sprite-by-sprite and sound effects (bleeps and bloops) along the way and finally one day the boards booted and we had two working Sky Skipper PCB’s!

Finally – I was ready to take the next steps – show the working boards to the world and assemble the team that could help bring the rest of Sky Skipper back from the grave for the world to enjoy. Our efforts are documented here on the project website – I hope you enjoy the result of our work!